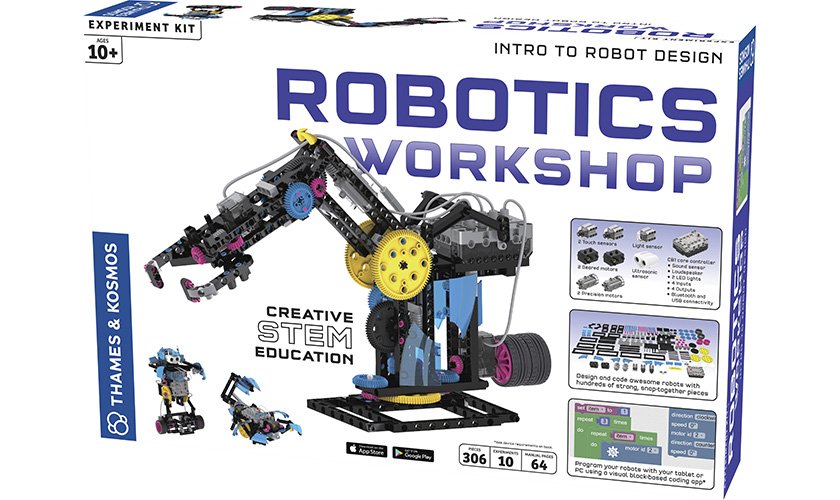 Build and program robots with this complete robotics engineering system. Using sensors, motors, a core controller, and hundreds of snap-together building pieces, you can follow the instructions to assemble ten different robots. The versatile parts also allow you to make robots according to your own designs.

This fun robotics curriculum starts out with instructions for building simple robots, teaching you how the sensors can be used to control the robots. Build an ultrasound robot that can avoid obstacles, a drawing robot, and a touch sensor robot. Move on to more complex robots that have multiple functions, such as a ball-shooting robot, a crawling robot, and a grabbing robot. Build a robotic arm that can pick up objects, a butler robot, a robot that will turn toward a light source, and a cool scorpion robot.

After you have mastered all of the robotic models in the instructions, you will have the tools and knowledge you need to go on and build and program your own amazing robotic creations.

The robots can be controlled directly in realtime and programmed to perform series of commands using an easy-to-use, free downloadable app on iOS or Android® tablets and Windows PCs. The mobile app wirelessly connects to the core controller using a Bluetooth low energy connection. The PC app connects to the core controller via a USB cable. The app uses the open source visual block programming library Google Blockly to make coding fast and easy to understand.

A 64-page, full-color manual features step-by-step illustrated building instructions and instructions explaining how to program and operate all of the robot models.

Robotic Components:
Ultrasonic Sensor
Your robot’s eyes! The ultrasonic sensor helps your robots gauge distances and determine where objects are. Using the core controller, the ultrasonic sensor is able to detect an object and measure its proximity. Technically it works like a sonar system: a sound is sent out and received again when it bounces off obstacles.

Touch Sensor
Your robot’s fingers! The touch sensor measures information arising from physical contact with objects, enabling your robotic creation to “feel” things in front of it! The sensor can detect single or multiple button presses, and reports back to the core controller, which decides what to do according to the program. The kit includes two touch sensors.

Geared Motor
Drive your robots! The two geared motors bring motion to your robots: Connect the motors to gears, wheels, and other pieces to move your robots in many ways. The kit includes two regular motors.

CB1 Core Controller
Your robot’s brain, ears, and voice! The CB1 core controller wirelessly connects the app on your tablet to the motors, sensors, microphone, speaker, and LEDs.

Speaker
Your robot’s voice! The loudspeaker integrated into the core controller allows you to program your robots to make sounds.

Sound Sensor
Your robot’s ears! There is a microphone on the core controller that can detect sounds. You can program your robot to react accordingly. So if you clap your hands once, it can mean one thing, and it you clap twice, it can mean a different thing. The sound sensor is able to measure noise levels around 3–6 kHz, where the human ear is most sensitive.

PC requirements for desktop app:
The desktop app is not supported on all computers. A Windows desktop or laptop PC with USB 2.0/3.0 port and Internet connection are required. The CB1 Blockly Desktop application was developed on Windows 10. It is expected to work on Windows 7 or higher, but the compatibility cannot be verified on all computers. Minimum system requirements: Dual core processor, 2.4 GHz (i5 or i7 Intel processor or AMD equivalent); 4 GB RAM; 100 MB free hard drive space for the application files; 802.11g/n wireless (for laptops; WPA2 support required); 19-inch LCD monitor (for desktops)