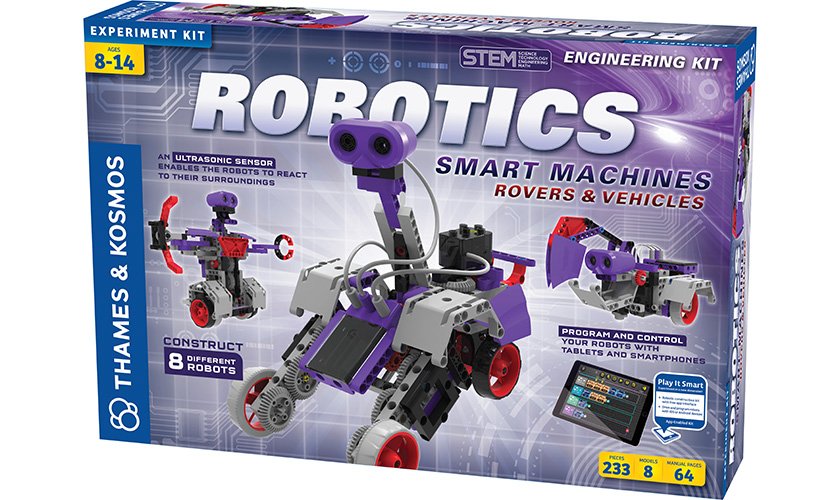 Robotics is a vast, thrilling, and sometimes overwhelming interdisciplinary field involving physics, engineering, and computer science. This kit gives kids a simple, fun, and customizable introduction to robotics that lets them build eight motorized machines controlled by programs and an ultrasound sensor. Kids code the programs using an easy, visual programming app on a tablet or smartphone, which connects to the robot models via a wireless Bluetooth connection.

The ultrasonic sensor works on the same principle as sonar. It sends out sound waves, which bounce off objects. The sensor interprets the echoes returning to it, and from this detects objects in the path of the sensor. Using the app interface, you can program the robots you build to behave based on the feedback coming from the ultrasound sensor.

Build a shy turtle robot that drives around and quickly avoids obstacles in its path. The friendly rover bot model first looks around for your hand and, once detected, moves toward it and follows it around. Construct an awesome desert explorer robot with wheels on legs; first it drives around, but when it detects an object in its range, it starts “walking” slowly toward it. Experiment with altering the program of your cute dancing robot so that the robot dances to the beat of a song you play for it. Set up an obstacle course and watch the scout rover use its ultrasonic sensor to navigate around the obstacles. A cool helicopter model spins its rotors and then raises its landing gear when you lift it off the tabletop. You can also assemble other fun robots including a dozer bot with a bulldozer blade and a scorpion robot with a stinger tail. After you have learned how the technology works, you can build and program your own robots using the kit’s 233 building pieces.

A full-color, 64-page step-by-step illustrated manual helps kids assemble all of the models and teaches them about robotics in the real world. The visual programming language allows you to command the robots’ motors to move at different times, different power levels, in different directions, and in response to the data from the sensor. Requires a tablet or smartphone running iOS (iPhone 4S or later, iPad 3 or later, iPod 5 or later) or Android (Android 4.3 or later on a device with Bluetooth 4.0 support).